It's time to party like it's 1983 as New Order & Pet Shop Boys bring their co-headlining Unity Tour to Huntington Bank Pavilion at Northerly Island on Friday 30th September 2022 (Rescheduled from Friday 1st October 2021)! The two iconic 80s synth-pop groups dominated the charts of the era with their club-friendly alternative electronica, changing the landscape of music as we know it, and inspiring fashion and a whole subculture movement! Believe it or not, this is the first time these two legendary acts have toured together, and it's guaranteed to be a spectacular trip down memory lane that is full of all your favorite hits from back in the day! 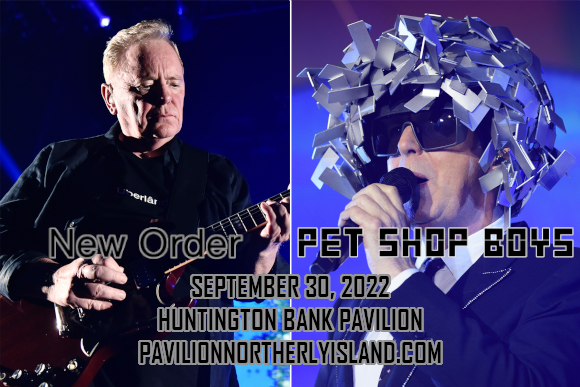 English synth-pop duo Pet Shop Boys began in London, England in 1981 and consists of Neil Tennant and Chris Lowe. According to the Guinness Book of World Reocrds, they are the most successful British duo of all time with over 100 million records sold worldwide. The band had its breakthrough in 1985 with the single "West End Girls", which reached number one in the United States, Canada, Finland, Hong Kong, Lebanon, Israel, New Zealand and Norway. Since then, the band has achieved 42 Top 30 singles, 22 of them Top 10 hits in the UK Singles Chart, including four UK number ones. The band's success in the US included five top ten singles in the 1980s, and they became known as part of the Second British Invasion. Pet Shop Boys have won three Brit Awards, been nominated for six Grammy Awards, and were honored with an award for Outstanding Contribution to Music at the 2009 Brit Awards, and NME's Godlike Genius Award in 2017.