DJs gonna blow speakers up to make way for the raunchiest, rowdiest, and rip-roaring party jams courtesy of none other than Kesha! Indeed, the party rock sensation has announced her "High Road" tour that will hit the ground running this 2020. One of her highly anticipated shows is happening at the Huntington Bank Pavilion at Northerly Island on Saturday 23rd May 2020, with the featured guest star –the Queen of Bounce Big Freedia. This place is about to blow-oh, so you better be quick on clicking the 'get tickets' link on this website. Book your tickets now! 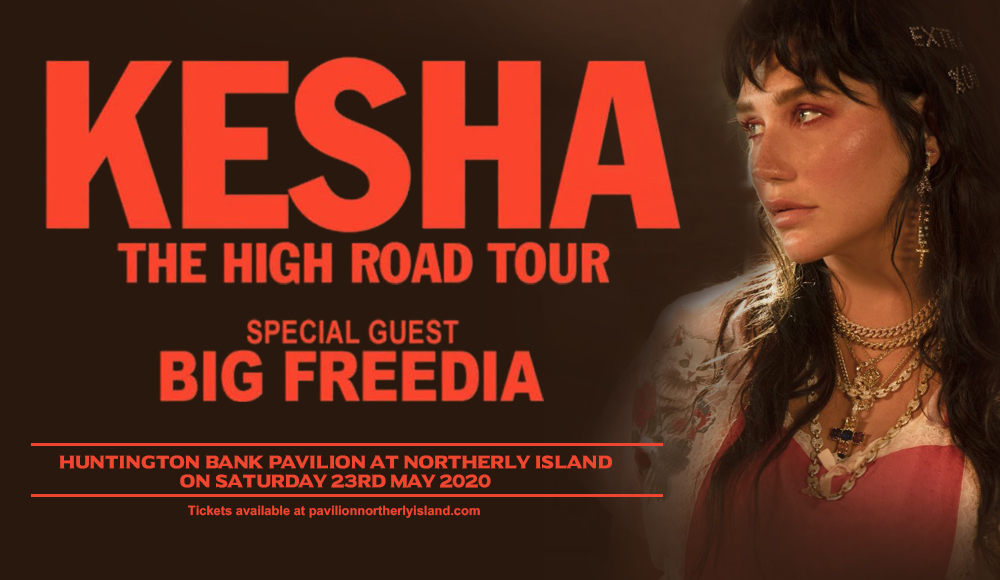 Kesha has always been a fighter. Her road to success was definitely not overnight. She pursued her passion for music in the school of hard knocks. She started literally in the background so to speak — sang background vocals for Paris Hilton's single, "Nothing in This World", "Lace and Leather", by Britney Spears, appeared in Katy Perry's "I Kissed A Girl", spent the previous six years working on material for her debut album. Her first major break came in early 2009 as featured vocals on American rapper Flo Rida's number-one single "Right Round", but refusing to be credited, be paid, and appearing on its music video, explaining to men's magazine Esquire that she wanted to make a name for herself on her own terms.

Kesha knew it was just a matter of time… Soon afterward, she exploded with two number-one albums on the US Billboard 200 with "Animal" in 2010 and "Rainbow" in 2017, and the number-six record "Warrior" of 2012. She has attained ten top-ten singles on the US Billboard Hot 100, including "Blah Blah Blah", "Your Love Is My Drug", "Take It Off", "Blow", "Die Young", "My First Kiss" with 3OH!3, and the chart-topping "Tik Tok", "We R Who We R", "Right Round" with Flo Rida, and "Timber" with Pitbull. "Tik Tok", at one point, was the best-selling digital single in history, selling over 16.5 million units internationally. As of November 2019, the song has sold over 25 million copies. Some recent legal disputes with her producer did not deter Kesha from coming out stronger. Kesha is now listed as the 26th top artist on Billboard's decade end charts from 2010 to 2019. As of 2019, Kesha has reportedly sold over 71 million records in the United States and over 134 million records worldwide.

But the part don't start 'til Kesha walks in… make sure you've got tickets before it happens, or miss out on the biggest party rock this year!