One of the most recognizable voices on the radio throughout the early-2000s, David Gray comes to Huntington Bank Pavilion at Northerly Island on Monday 18th July 2022 (Rescheduled from Monday 19th July 2021) to celebrate the 20th anniversary of his seminal album White Ladder! The album, which gave rise to such hits as "Babylon", "This Year's Love", "Please Forgive Me", "Sail Away" and "Say Hello Wave Goodbye", was an innovative bridge between the worlds of folk and electronica, and the 20th anniversary tour is a must-see for any fans! 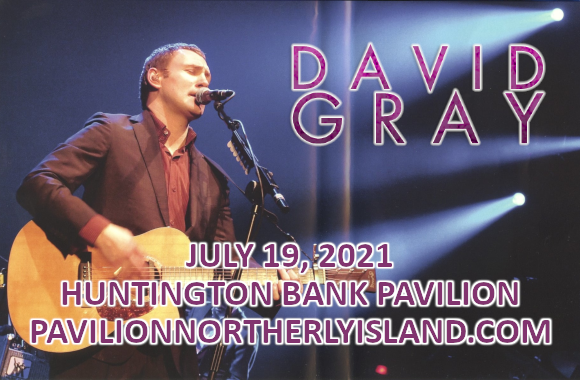 British singer-songwriter David Gray began his career in 1993, releasing his debut album, A Century Ends, that year. However, it was a re-release of his fourth studio album, White Ladder, in 2000 that catapulted Gray to fame. The album launched five hits: "Babylon", "This Year's Love", "Please Forgive Me", "Sail Away" and "Say Hello Wave Goodbye", and it spent a total of 175 weeks on the UK charts, making it one of the longest-charting albums in UK chart history. The album also became the fifth best-selling album of the 2000s in the UK and the UK's tenth best-selling album of the 21st century. The recipient of two Ivor Novello Awards for songwriting, Gray has continued to write, record and tour throughout the years, and has released 11 studio albums to date. His most recent album, Gold in a Brass Age, was released in March 2019.