Every year, Dave Matthews Band hits the road on its annual tour, bringing legions of fans together from all across the world for a massive, groove-laden party! The iconic group comes to Huntington Bank Pavilion at Northerly Island on Saturday 27th June 2020 for the second in a two-night stand, performing an assortment of songs from their epic back-catalog of multi-platinum-selling albums, and taking those songs to the next level with their unpredictable, improvised jam sessions, where anything can happen! This tour is not only going to be a chance to see the headliners do their thing, but they'll be joined for the stint by an array of a-list special guests, including Mavis Staples, Béla Fleck and the Flecktones, Allen Stone, Robert Randolph and the Family Band and Dumpstaphunk! 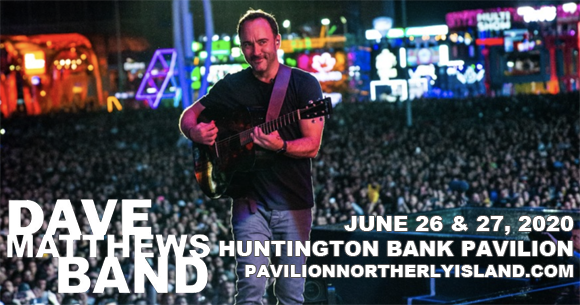 In an age of overblown performances and dramatic stage theatrics, it's refreshing when a group's musical talent is the defining characteristic of its live shows. It's this integrity and consistent no-frills dedication to quality, spanning over nearly three decades, that has made Dave Matthews Band the enormous success it is. The band was founded by singer-songwriter and guitarist Dave Matthews, bassist Stefan Lessard, drummer and backing vocalist Carter Beauford, violinist and backing vocalist Boyd Tinsley, and saxophonist LeRoi Moore, who sadly passed in 2008, and made its breakthrough in 1994 with the major-label debut album Under the Table and Dreaming. The record was a huge hit internationally, going six-times platinum. This was just the beginning for the band, which won a Grammy Award for the song "So Much to Say" from its seven-times platinum second studio album Crash (1996), and over the following years released a string of seven consecutive studio albums that each debuted at number one on the Billboard 200 (this was a first for any band). In addition to its commercial success, Dave Matthews Band is acclaimed for its live shows and has sold over 100 million concert tickets to date, as well as having released a colossal 38 live albums throughout its career. The band is known for jamming out at live shows – ensuring that no two concerts are the same and making a point of performing its songs differently each time, pushing its creativity to the limits and taking the audience on a wild ride!