'It's the only life you got, so you gotta live it big time! As live music makes its return back to the stage, 2022's getting even bigger with the boys that took the world by storm, Big Time Rush, is making a live comeback on the Forever Tour, with a stop at Huntington Bank Pavilion at Northerly Island on Thursday, 7th of July 2022. The teenage heartthrobs behind the smash hits "Worldwide", "Windows Down", and "Boyfriend" is back together, dropping 2 new singles, 2021's comeback single after about 8 years, "Call It Like I See It", and the fresh new track where the boys took on a "totally legit" love advice business in their new video "Not Giving You Up". 2022's definitely got it 'big time with a big live show comeback from Big Time Rush. Book your tickets now! 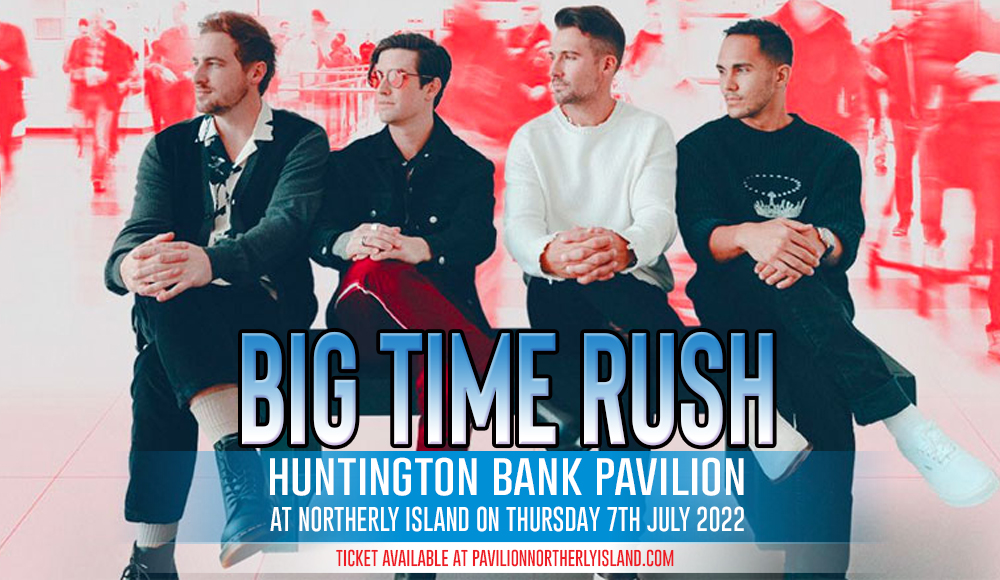 Big Time Rush members Kendall Schmidt, James Maslow, Carlos PenaVega, and Logan Henderson are definitely 'not giving you up as the boys reunited after an eight-year break with their comeback single "Call It Like I See It" taking the world by storm last December. In an interview with PEOPLE, the band described their reunion to be "serendipitous".

"We're family a hundred percent," said Carlos. "You know, it's like brothers, you don't always get along with your siblings. But you always love them" says Kendall.

After some time of meeting together and finding their sound, the bands said that open minds and open hearts made it possible, and they're just excited.

Big Time Rush has three studio albums to date namely, BTR, Elevate, and 24/Seven, all of which won the hearts of fans across the globe. Can fans expect a new record real soon? Well, all we know is fans have got to watch out for who knows what other surprises BTR throws in after a new single and a tour announcement.

From being cheeky Nickelodeon stars on their hit show in the early 2010s, the boys have matured but remained young at heart as a reunited family as they take on a new era for the band and their fans around the world.

"A blessing in disguise was that the music was good when it started, but after a year of revising, revisiting, figuring out what we want to do, our music now is so much better. So everything happens for a reason. And we're super pumped for the fans," says James Maslow in an interview with PEOPLE.

You can expect BTR to perform their biggest hits, fan-favorites, and their new singles live on stage at the Forever Tour. Will they perform "Windows Down", "Big Time Rush", "Like Nobody's Around", "Boyfriend", "Call It Like I See It", and "Not Giving You Up"? Book your tickets now and find out when you meet them at the Forever Tour!